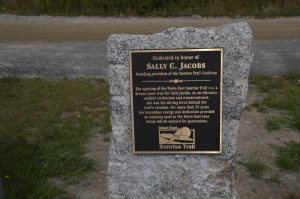 It’s no exaggeration to say the Sunrise Trail would not exist if not for Sally Jacobs. Sally began her work advocating for the development of bicycle trails in 1975. Over the next 35 years she helped procure funding to build trails connecting Orono, Old Town and the University of Maine. In 2000 she became founding president of the Sunrise Trail Coalition, a position she held for 12 years.

For Sally it was a dream come true when the 85-mile Down East Sunrise Trail opened on the rail bed between Ellsworth and Ayers Junction. Over the course of her remarkable life, Sally received more than 25 awards for her civic efforts. Sally died in 2012, and in October of 2015 the Sunrise Trail Coalition erected a monument honoring her at Machias.